skip to main | skip to sidebar

I remember a time, as a child, when I would completely drop everything I was doing at the moment to point and laugh at the sight of my dog going to the bathroom in our backyard. I didn't do this for my own amusement (because, really, who wants to see a dog taking a dump?), but more so to embarrass my dog...which I always managed to accomplish. The look of humiliation on her face cracked me up at the time.

Anyway, as I was walking to my car this morning, I saw a dog going to the bathroom and thought to myself, "How embarrassing. The poor guy has to do this in front of all of these people." I then realized how much of an asshole I must have been to point and laugh at my dog who just needed to relieve herself and had no other option but to do so in a backyard frequented by a dick of a child.

I guess I've done a bit of growing up since then... 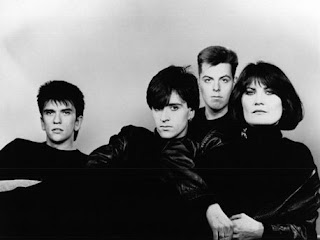 - Sandie Shaw has a great voice and has been active for something like 30 years. This particular release features Sandie's rendition of the Smiths' first single, Hand In Glove. Rough Trade (I believe) got in touch with her to record the cover and got the Smiths to actually act as the backing band. It really is a great cover. I believe the backing track, I Don't Owe You Anything, is another Smiths cover...again, a great one. Jeane is a Sandie original, I believe, and, once again, is great. An incredibly solid 12" single record that I am still trying to track down at brick and mortar stores (ie not eBay).

- Take some sort of drug and listen to the first track on repeat. Trippy, tribal influence. Love this group.

- Love this release. Nasty garage pop. Kill Tonight takes a few listens to get into, but then you realize how great it is. Short, to the point, and catchy as hell.

- I stumbled upon this cassette months ago, just after the band had played DNA Test Fest at Velvet Lounge, and was instantly bummed. Not because I didn't like the cassette. The exact opposite, in fact. Grungy noise-rock from Brooklyn. The first track, Catheter, is one of the best songs I've heard this year (assuming the cassette was released this year - I'm not totally sure). Anyway, enjoy.

The music on this blog is intended solely for sampling purposes. If you like what you hear, buy the record/cassette.